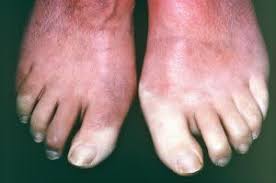 There has been much confusion over the name and more recently the word ‘Disease’ has been dropped, the condition simply being called Raynaud’s or Raynaud’s phenomenon. Raynaud’s can be subdivided into primary and secondary.

When subjected to extreme reactions to the cold or any slight change in temperature, the extremities change colour and can be extremely painful. Initially one or two fingers may turn white and feel numb. This can occur occasionally or regularly with all the fingers eventually becoming involved. It can be very worrying at first, especially if the fingers then change to a bluish colour followed by bright red. Not knowing why this happens can often make matters worse, as stress can exacerbate the problem. At this point it is worth going to your GP to find out what is wrong. More often than not if these colour changes are occurring in the hands and possibly in the feet, nose or ears, a diagnosis of Raynaud’s will be given. Who gets it? Anyone of any age can develop primary Raynaud’s which occurs spontaneously without any underlying condition being present. It can be hereditary in which case it is usually fairly mild. Raynaud’s is quite rare in young children but is common in teenagers and although troublesome for a few years, usually disappears in the early twenties, although this is not always the case. Secondary Raynaud’s which is much less common, is associated with an underlying disease or external factors. This is more serious and earlier and accurate diagnosis is essential.

Treatment remains the most challenging problem in Raynaud’s but does not always require pharmacological intervention. In many patients with mild Raynaud’s, wearing warm clothing, protecting themselves from the cold and avoiding changes in temperature will obviously help. Portable heating aids can be invaluable during the cold weather. Your G.P. can advise on treatments which may help to alleviate the condition. Drug therapy is indicated for those suffering intense pain, functional impairment or digital ulcers. The treatments available provide symptomatic relief rather than cure and patient response is variable, so it is worth trying more than one drug within a particular class. Avoid beta blockers as these can make Raynaud’s worse.

A surgical procedure, called a cervical sympathectomy for Raynaud’s phenomenon, has been shown repeatedly to produce little or no benefit and is therefore no longer popular with patients or surgeons. In severe cases this operation can now be performed by laser. Lumbar sympathectomies for the feet however, can produce good results and can be carried out by injection rather than surgery. A sympathectomy-like operation on the fingers and/or hand has been shown to relieve severe pain and to heal finger ulcers. This operation is not a cure but the attacks are often less severe.

What is scleroderma? The word scleroderma comes from two Greek words ‘sclero’ meaning hard and ‘derma’ meaning skin. The hallmark of the disease is an over production of collagen. Collagen is the major protein of the connective tissue which binds the body together. It is found in the skin, blood vessels, joints and internal organs. In this condition the skin, usually of the hands and feet becomes stiff, tight and shiny. This is because of swelling and then thickening of the connective tissue which becomes fibrotic or scarred. Internal organs can also be affected in a similar way. What is the connection between Raynaud’s and scleroderma? Raynaud’s can be the first symptom of scleroderma and may occur many years before other symptoms. However, only a very small proportion of Raynaud’s sufferers will develop scleroderma.

If you have Raynaud’s severely or if the condition appears to be getting worse, it is worth going to your GP and asking for a blood test in order to eliminate or confirm the presence of an associated condition, such as scleroderma or systemic lupus erythematosus. If it is abnormal your GP will almost certainly wish to seek further help by referring you to a specialist centre. The blood test aims to look for the presence of antinuclear antibodies, which mark out the connective tissue diseases. If you have mild Raynaud’s which is little more than a nuisance, the chances are that you have Primary Raynaud’s. This means that it is benign and taking drugs such as vasodilators which open up the blood vessels, allowing blood to flow through more easily, or simply keeping warm may be sufficient.

In this test the capillaries at the base of the nail may be examined with an ophthalmoscope, magnifying lens or with a capillary microscope, to look for abnormal patterns. The result is positive if significant damage to the very small blood vessels is observed. There are however, a group of patients who have abnormal nail fold capillaries and/or positive antinuclear antibodies, but who after follow up do not develop definite connective tissue disease. These patients have autoimmune Raynaud’s.

This test is performed by means of a state-of-the-art infra-red camera that sees the heat generated by the human body and translates it into colour scale which can map a patient’s skin temperature. The measurements are made in a cool, temperature-controlled room, where the patient first rests for 15 minutes to acclimatise. Electronic images are then taken using a thermal imaging camera which detects the infra-red radiation which is continuously given off. The amount of radiation detected depends on the temperature of the surface viewed and the images are colour coded to show the temperature distribution. Lower temperatures appear as blue and higher ones as red, pink or white. Thermography is non-invasive which makes it particularly suitable for use with children and for repeated measurements.

This technique is used mostly as a research tool at a number of specialist centres. Laser Doppler measures the blood flow in the small skin vessels by illuminating the skin with very low power laser light, and detecting the light scattered back from the skin. Some forms of laser Doppler involve attaching a probe to the skin surface, whereas others involve a light beam that scans across the skin surface to produce an image of blood flow over an area. Further refinements allow those measurements to be made whilst the skin is gently heated, or whilst a test drug is applied to a small area of skin.

How do I stop sweaty, smelly feet?

Why do I get foot pain?

Howlett & Dickinson is a podiatry practice based in Gosforth, Newcastle upon Tyne accredited by the College of Podiatry.
Established in 1982 we have over 35 years of experience of feet. There really is nothing we have not seen.